What it's like to literally write the book on Donald Trump

Next Wednesday, the Reading Through It Book Club will meet at Third Place Books Seward Park at 7 pm to discuss Unpresidented, a meticulously researched biography of Donald Trump intended for young readers. For the first time in our book club's history, we'll be joined by the book's author — Seattle's own Martha Brockenbrough. I talked on the phone with Brockenbrough yesterday about what to expect at the book club, what it's been like to hand over so much headspace to such a terrible person, and why it's important to not tune out the news, no matter how tempting that may be.

Thank you for agreeing to come to our book club next week! We're really excited to have you — you'll be the first author to attend one of our meetings. Unfortunately, I'm not sure you'll like this first question. In our book club, we all vote on the next book we'll discuss, and the vote for Unpresidented was closer than I thought it would be. One book club attendee actually pointed at Trump's picture on the dust jacket and said, "I don't want to have to look at that man for a month." Which I found to be a pretty remarkable statement for a book club that started in direct response to Donald Trump winning the 2016 election! So I was wondering if you've had a lot of pushback from exhausted liberals who are suffering from Trump fatigue and if you have anything you say to those people? 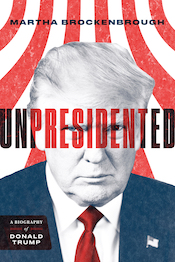 About the cover — the dust jacket comes off. Seriously, I can totally understand the feeling of being triggered — because I got to a point where it was very difficult for me to listen to audio clips. When someone is not telling you the truth, you feel insulted. Being honest with each other is an absolute basis for our community — you cannot live in a civil society without honesty being the norm — and the fact that he has so violated this particular norm, I think, is one of many reasons that people feel triggered.

But it's important. We have to look, we have to gaze into the abyss. And you know this is where we, especially those of us who enjoy any sort of privilege at all — meaning we don't fear we're going to be deported based on the color of our skin — we have to brave it.

What was it like writing a book about current events? Obviously, unfortunately, the Trump presidency is still ongoing , and so at some point you had to let go of the book and send it out to be printed. How did you decide how to stop writing this book?

You know how traditional presidential biographies often go through the first hundred days? My editor suggested [covering just] the first hundred days. But I took a look at what had happened, I made this big huge spreadsheet of the timeline and events, and at the end of the first hundred days he had not yet fired James Comey, there was no Mueller investigation, they had not implemented a plan of separating families at the border. So some of the dominant features of the Trump presidency hadn't happened yet.

So I just decided that's not going to happen — I'm going beyond the first hundred days. My second thought is I wanted the book to feel as fresh and current as possible.

So when he, in Helsinki, once again rejected the conclusions of the American intelligence community in favor of his bromance with Vladimir Putin, and when John Brennan and others were saying 'this is treason,' I decided that's a pretty good place to end the book.

But if you look at it another way, not a lot of stuff has changed with Trump — not since he was a little boy writing poems about winning at baseball and loving the cheers of crowds. I wanted to set up patterns: his father's business practices, his business practices, his grandfather. I wanted to identify the patterns and see what those told me about Trump and the things that drive him. Once you do that and identify the fact that here's a guy who's long been entangled with Russia, here's a guy who's long broken the law and cut corners with business — once you establish those patterns, then all the breaking news headlines are frankly more of the same.

And so my job as the writer was to find a representative dramatic and satisfying ending, and I think a whiff of treason says that nicely.

So you might be able to teach us how to separate the meaningful Trump news from the pointless Trump news?

There's been nothing that's come out since my book was published that is surprising or new for me. It's all in there.

There's always the possibility for surprise — I don't have a lot on Saudi Arabia and certainly the murder of Jamal Khashoggi, and whatever Jared Kushner is doing with his businesses. But when you look back, the big themes — lying, corruption, racism, misogyny, bigotry, incompetence — these things aren't changing.

It's compelling to follow the headlines, but really, what's important? Continuing to vote. What else is important? Paying attention to what happens in the Mueller investigation — and certainly in Congressional investigations, but the Mueller one is really historic in its breadth and importance.

And then other than that, we have actual major issues — you know, climate change is huge. The amount of homeless students in Washington State, homeless kids in the Seattle Public School district — that's huge. Let us fight these local and global battles, and know that for us to have up-to-the-minute understandings of the latest scandal that already fits an established pattern is not as important as taking care of ourselves and the people around us.

Are there any aspects of the Trump presidency that you haven't talked about yet that you might like to discuss next week?

Let's see what the news is next week. Like yesterday, for example, Junior said this [Russia] stuff happened in 2006, before Trump ever dreamed of running for office. Bullshit! He's been talking about running for president since 19-fucking-80. You cannot trust a single thing these people are saying. So, there's bound to be some news and we could certainly use it as an example.

Can I ask you, as an expert, why does Donald Trump play "You Can't Always Get What You Want" at the end of his rallies? It's such a deeply bizarre choice for a presidential event.

I mean, he's just probably thinking, 'oh, this is something that they'll like — it's a crowd pleaser.' And he's just a huge dork. He's just this guy who peaked in high school, who wants everybody to love him, who has done poorly in business, has cost taxpayers, like, $1 billion in New York, his billion-dollar loss cost banks and he used it as a tax write-off. He has slurped $2 billion from the public and doesn't have much to show for it. And he just wants to be beloved and cool. It's just amazing he was elected.