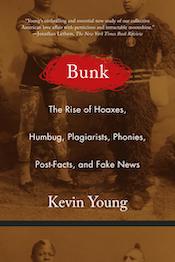 Kevin Young's Bunk: The Rise of Hoaxes, Humbug, Plagiarists, Phonies, Post-Facts, and Fake News is, in my opinion, one of the most useful books we've discussed in the Reading Through It Book Club so far. As one of our members pointed out, it's a text we'll be returning to time and time again in our future discussions — like The Righteous Mind and Janesville and several others.

Bunk is a historical account of a very particular kind of American con — the loud and boisterous and unapologetic lie, perfected by P.T. Barnum and perpetuated through the years by plagiarists and confidence men and fabulists. What's more, Young ties that lineage of liars and cheats in with America's long history of racism. Our American exceptionalism at hoaxes, it turns out, is a byproduct of America's original sin.

One of the best observations at last night's book club was the recognition that a simple lie isn't enough to make something a hoax. It's not enough to spread falsehoods to make a true hoax: you have to generate a mistrust in the truth, too. By creating an atmosphere in which everything could be false, the most confident liar gets to dictate the reality. It worked for Barnum, and it has worked thus far for Donald Trump.

Young is a great writer — one of the best we've read at Reading Through It. He's funny, his observations are always sharp, and the research he has done for Bunk is truly impressive. (It probably helps that Young is a brilliant poet, too; there's an art to Bunk that no 'mere' historian could summon.

It's become kind of a cliche to complain that sociological book does not provide solutions, but our book club still found ourselves wishing for a second volume by Young titled Debunk — one which provided step-by-step instructions for pulling apart hoaxes. But to employ another cliche, you can't unring the bell of a hoax: once it's out there, it's unstoppable.

The best way to stop a hoax is to kill it before it becomes a hoax, to smother it in truth when it's still just an over-ambitious lie. Occasionally, we'll hear about a hoax collapsing before it even begins — Jacob Wohl, the moronic conservative fabulist, has had several schemes dissolve in daylight, including one poorly attempted hoax this week — but in general, you don't hear about all the tricks that fail to gain purchase.

The fact is, we desperately need to improve our systems of truth-telling and lie-smashing so that they can catch up to the speed of the internet. As Trump has proven, a lie can fly from Twitter to global headlines in a matter of minutes. It's on all of us to be better consumers of media, to learn how to defuse a lie before it explodes in a flurry of shrapnel. In the internet, we have created an unparalleled system of global communication. Now, some thirty years later, we mustprove ourselves worthy of it.