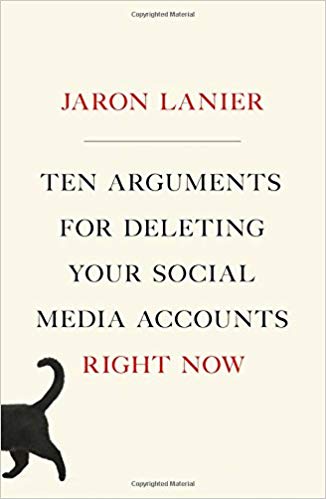 It's true that Jaron Lanier comes across as abrasive to many readers. He's been immersed in the tech industry for decades, and so his writing and speaking style have a kind of Silicon Valley style to them: he speaks in broad generalizations, and he's got a holier-than-thou libertarian vibe when he writes grandly about society.

But it's precisely because Lanier is a creature of the Silicon Valley that his thoughts on technology are so important. Read any of his books — I started with You Are Not a Gadget — and you'll see that he's a very different kind of tech evangelist: he's an advocate for consumer privacy and transparency between users and services. He's a traitor to his own people, and that makes him a compelling narrator.

Last night's Reading Through It Book Club discussed Lanier's most recent book, Ten Arguments for Deleting Your Social Media Accounts Right Now. It was just the right time to discuss the book — most of us had taken a break from social media over the holiday vacation break, and we were suitably wary of re-engaging with our Facebook, Instagram, and Twitter accounts after reading the book.

You've likely heard many of the arguments against social media, and you likely still use social media. Maybe you feel guilty about it. Perhaps you recall a time when you were off social media and you felt more relaxed and engaged and generally happier, but you still find yourself numbly refreshing your feeds, desperately looking for something new. The mechanics of this are simple meat and chemistry: the dopamine hits, the fear of missing out, the boredom of waiting in line at the grocery store.

In "Deleting", Lanier makes ten arguments against the shiny allure of social media. Some of the arguments overlap — "Social media is destroying your capacity for empathy" and "Social media is making you into an asshole" sound pretty similar, for instance — but they all boil down to one tortured acronym. Lanier identifies the one problem of social media as "Behaviors of Users Modified, and Made into an Empire for Rent," or BUMMER. He argues that "BUMMER will lead us into hell if we don't self-correct."

The tone of last night's book club felt a little bit like a 12-step group for addicts: A spirit of resignation, the glimmer of recognition when someone describes negative behaviors, the promise of a better way around the corner. I would argue that we are all much more savvy about the perils of social media now than we were a decade ago, though, and agitators like Lanier are helping us realize how much our perceptions are being forcefully changed by the algorithms.

And though we have all gone crawling back to the never-ending feed in the past, that's not proof that we will always fail in our pursuit to free ourselves from the bad actors who are selling us a funhouse mirror of ourselves. We can get through this the way anyone in recovery does: one day at a time, focused on incremental improvements, and with the serenity to accept that not every step will be in a forward direction.