The flat white goes sour: Watching Howard Schultz make the case for his own presidency

Instead of reading this piece about Howard Schultz, I would much rather you spent this time reading about real policies that would help Americans eliminate the inequality that has hobbled this nation for the last 40 years: Elizabeth Warren's plans to tax the wealthy and put workers on the boards of corporations, Bernie Sanders's plans to raise the estate tax, Kirsten Gillibrand's plans to institute paid family leave and publicly funded elections, Kamala Harris's calls for universal pre-k.

Virtually all of the Democrats who are running for president have put together thoughtful, ambitious policy proposals that would change the power dynamic in America, helping to re-establish the middle class as the true center of the economy and of the future. Focusing on these ideas, rather than the whims of some dilettante who wants the validation of history, would help to make our country a better place. Please, please focus on substance.

But here's the thing: last night, I saw former Starbucks CEO Howard Schultz speak at the first event in his adopted city of Seattle since he announced Sunday on 60 Minutes that he was considering a run for president. And I am still furious about what I saw.

The way I process things is I write about them. And then I publish them on websites, in the hopes that perhaps my processing will be useful to someone else. So I'm going to talk at length about Howard Schultz right now. I'm not doing it because he's important or because he's thoughtful or serious. In fact, he is the opposite of all those things. But I still have to process my experience at the Howard Schultz event, and so that's what I'm doing here. I urge you to do something more useful with your time than think about Howard Schultz.

But for the rest of you, those foolhardy few, I will start writing about my evening with Howard Schultz now.

So far as Seattle events go, the Howard Schultz book launch event last night at the Moore Theatre was about as Seattle-y as they come. There was a protest out front — across the street, very politely corralled away from the doors of the Moore. People waved around signs. My favorite was one that said WHAT THE HELL, HOWARD?, but there were plenty to choose from: DON'T SPLIT THE ANTI-TRUMP VOTE, A DOUBLE SHOT OF STUPID — A GRANDE DRIP, and CLUELESS BILLIONAIRE$ MAKE CRAPPY POLITICIANS. 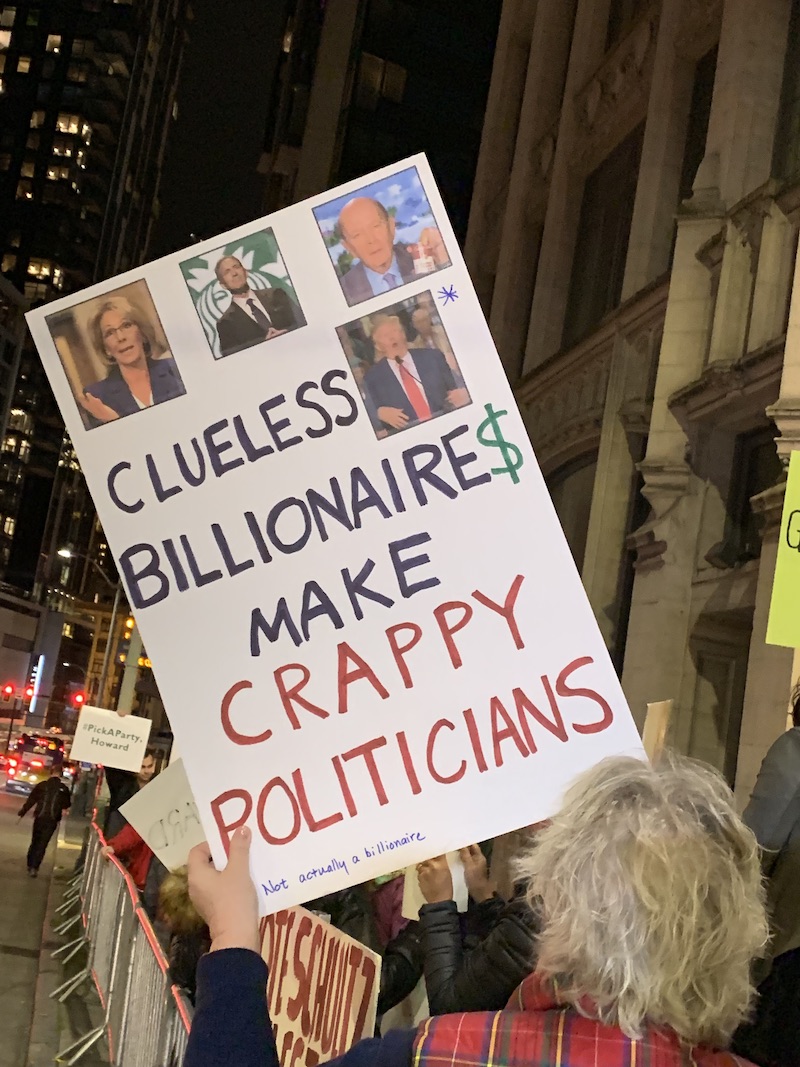 The protesters' message was fairly polite, too: they tried to appeal to Schultz's better nature by chanting "pick a party," rather than "go fuck yourself," say. They suggested that he run as a Democrat. They argued that he was a great businessman and a good man, deep down, but they took issue with his decision to run as an independent and therefore potentially pull votes from whoever gets the Democratic nomination in 2020. It was all very civil.

The raucous, angry protests I imagined simply didn't materialize. Unlike the rollout of Schultz's event in New York City, nobody called him an "asshole." There were no coordinated protests inside the venue, and the heckling was very light.

Perhaps most surprisingly — and damningly for a Seattle event, the evening did not begin nor end with a standing ovation.

The crowd inside the Moore was very traditionally Seattle, by which I mean it was super-white, and wealthy, and older than the crowds you see on the street in South Lake Union. People wore business casual and outdoorsy fleeces. Their applause felt ostentatious, like it was a performance to show the world that they were good and correct moral creatures. Perhaps most surprisingly — and damningly for a Seattle event, the evening did not begin nor end with a standing ovation. Seattle crowds are notoriously easy with their standing o's, and the denying of an ovation from Schultz at his homecoming felt like a noteworthy snub from such a Seattle-y room.

As I entered the hall, someone handed me a square piece of thick cardboard — a coaster, maybe? — that had printed on it, in Schultz's messy handwriting, "Don't be a bystander," along with the name of his new book, From the Ground Up, and the puzzling hashtag #reimagineus, which was supposed to be a call for reimagining the United States, but which read more like the name of a failed Roman emperor or a bad advertisement for an REI store remodel.

Schultz's hour-and-a-half conversation with Evergrey editor Mónica Guzmán was especially noteworthy for the fact that Schultz did not list one single policy that he would promote if he were to be elected president.

Instead Schultz talked about all the things he would not do. He said he opposed Trump's border wall and his corporate tax cuts. But he also said he opposed the "progressive" policy agenda that Democrats in Congress were promoting. He listed three of those policies in quick succession: Free health care (the crowd cheered for it) and free college (the crowd also cheered for it) and "government jobs for everyone" (a mangled interpretation of a jobs guarantee bill which elicited more confusion than anything else from the crowd — one woman issued an incredulous "WHAAAAT!?" when Schultz said it.)

When Schultz announced that he doesn't know how we can pay for those policies, some hero in the audience shouted "pay your taxes!" People applauded. Schultz almost certainly heard — I've been on the stage of the Moore during busy events in a packed house, and you can hear people talking at normal levels in the back row — but did not reply. 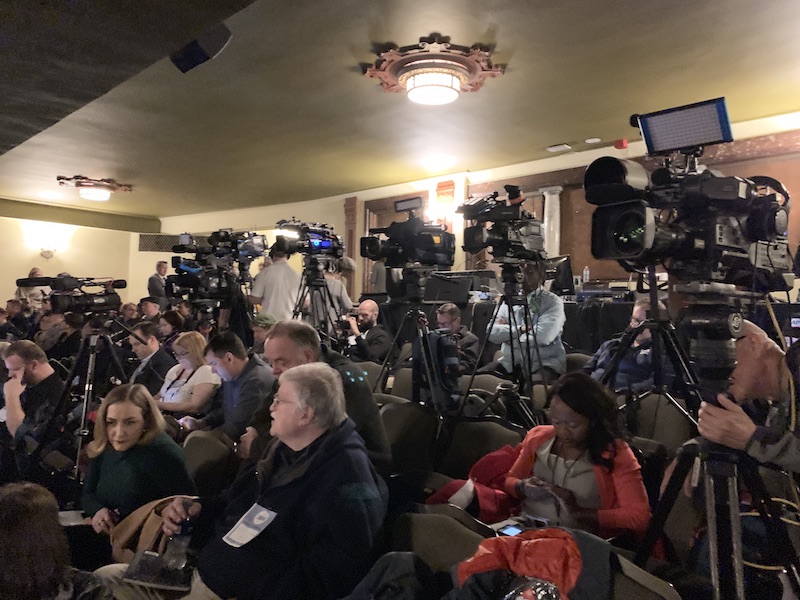 Schultz is not especially charismatic. He can put sentences together, and he looks the part of an intense leader, but he doesn't carry a mystery about him, a suggestion of a deep interior life. It's easy to picture him thinking about the song "Pop Goes the Weasel" in any given situation — underneath that slick of gray hair, you get the sense that there's often not much going on.

Further, Schultz does not seem especially smart. He talked about the national conversation with all the depth of the coaster everyone was handed on the way into the theater. Whenever Schultz was asked why he was running as an independent, he'd turn to the audience and say something like, "how many of you think the situation is working well as it currently is?" That's all well and good, but you wouldn't go up to people who were trapped in a burning building and say "it would be a lot worse if there were a bunch of sharks in there with you, wouldn't it?"

Schultz is perhaps the world’s first identity politics billionaire. He whines about being labeled as a billionaire in the same breath that he acknowledges that it’s a true label.

Schultz is perhaps the world's first identity politics billionaire. He whines about being labeled as a billionaire in the same breath that he acknowledges that it's a true label. He says he feels attacked for his great wealth, and he longs for the good old days when people "celebrated success." He's someone who suffers no ill consequences from Donald Trump's actions in the White House, but who would lose money if Democrats took power and passed sane tax legislation. That's why Schultz can call Trump "exhausting" in the same sentence that he complains about the "toxicity" of Democrats in Congress. Democrats are poisoning everything; Trump makes Schultz want to take a nap. Though he actively begged for the spotlight of intense national scrutiny to fall down upon him, he has clearly been coddled to the point that he believes himself to be the innocent victim of a "punitive" and jealous smear campaign centered around his wealth.

In short, Schulz seems delusional. No humble person talks about their own humility as much as Schultz did last night. No humble person has to announce "I'm not a Messiah." No humble person would run for president and then compare themselves to the father of the country: "Imagine for the first time since George Washington that an independent person could win."

The worst answer of the night came when Schultz tried to explain away his abysmal voting record. Danny Westneat reported this week that Schultz has only voted in 11 of the last 38 elections, and Schultz claimed that he's voted in every presidential election since he turned 18 and that he just "wasn't engaged" in local politics.

This, to me, is the most baffling part of the whole thing. I don't know how you can have the gall to identify yourself as a civic leader, as someone who can change the conversation forever, while not taking an interest in the operation of the city around you. People have asked why Schultz doesn't run for Seattle City Council; I have my doubts that he could name his home district's City Councilmember.

He seems thoroughly uninterested in the mechanisms of political power. When Schultz explained how he lost Seattle's basketball team, his story portrayed himself as the hapless loser, torn between civic forces he didn't understand. When he then expressed his disinterest in city, county, and state politics, he reconfirmed that portrayal.

In the end, here's what I think. I think Howard Schultz is a man who is in over his head. I think he's an arrogant man who has fallen prey to some money-grubbing consultants who are playing out his expensive fantasy on a world stage for as long as they can. He's not especially bright when it comes to politics, and he's aggrieved, and he's starting to behave like a wounded child. He thinks the world owes him awe, and he's mad that he's not getting it.

While I could see some Americans falling for the idea of a Howard Schultz presidency just based on hearing the broad strokes of his autobiography, I don't think the man can survive the scrutiny of this process. More, he's not good at it. I don't expect that many people left the Moore last night banking on Schultz to win.

Given that Schultz ended the evening by running away from the press, I suspect that even he's starting to have doubts that he's the right man for the job:

Video of @HowardSchultz ignoring the press, many of whom sat at Moore Theatre for 2+ hours on the explicit promise there would be a media availability after the event. #Q13FOX pic.twitter.com/fHmpC5gTnA

But here we are now — I've spent hundreds of words discussing the reasons why a man who is clearly not qualified to be president of the Seattle City Council should not be President of the United States, and you've read this far. So does that mean we're part of the problem, you and I? Should we have ignored Schultz from the start until he demonstrated a certain quality or sturdiness or talent? Maybe so. But we're also human, and humans love to rubberneck at a disaster and Howard Schultz is undeniably this week's disaster.

But now that Howard Schultz has told us who he is — now that he has proven incapable of discussing policy, or promoting a vision for the country beyond "being nice" — it's time to ignore him again. No matter how much money he spends, no matter how much the press loves to lavish their spotlights on him, we have to let him go. The last time we couldn't look away, we wound up with a monster in the White House. We failed the test last time; this time we must do better.