Seven years of good luck at the XOXO Festival 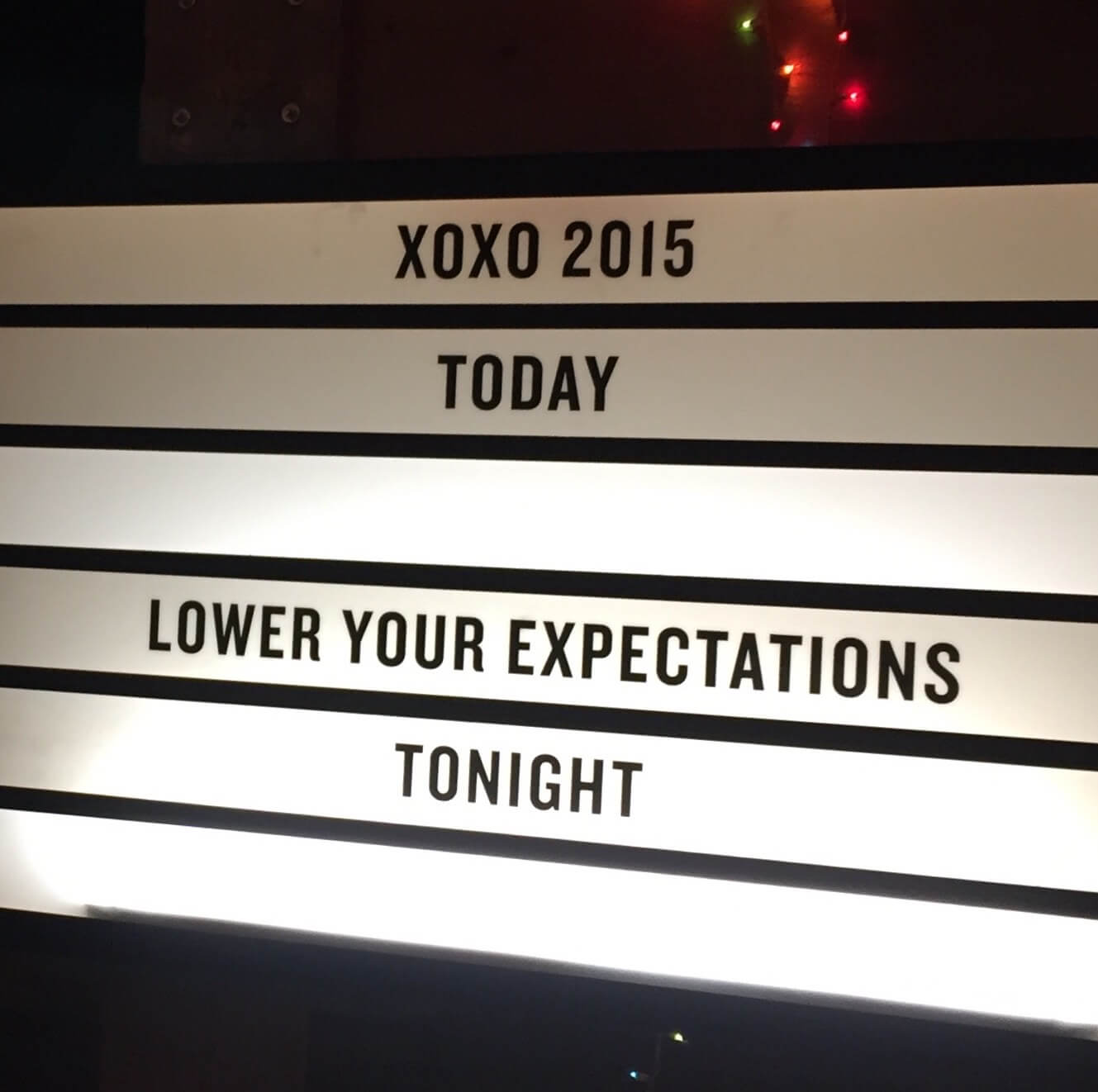 For the past eight years, minus one when it was on hiatus, I’ve spent early September amidst a colorful, creative, productive, and intimidatingly humane group of people in Portland at the XOXO festival.

It started with a Kickstarter. Andy Baio, who I’d followed for years as one of the most tireless and delightful chroniclers of internet culture at his waxy.org, posted this on Twitter:

Hugely excited to announce @xoxo, a new conference & festival this September in Portland! Get your tix quick: http://t.co/p6pfgYQ8

Andy posted at 11:30am, and I backed the festival at 1:45pm. The festival sold out in fifty hours. That I would give someone I didn’t know, but had admired online, $400 for something that didn’t yet exist gives you a good idea of how much I’d loved Andy’s work over the years.

One of the great joys of the magazine and newspaper age, that transferred well to blogging but horribly to bigger social media, was getting to know certain writers. Reading the same byline month-after-month, you develop a sense of the person, their tastes, their quibbles. I can’t express the exhilaration of seeing a (now retired) Margalit Fox byline in the New York Times obituaries, or the rush of pleasure from when Paul Ford sighs and says "well, I guess I’m gonna have to write about that", to name but two examples.

I co-founded this very website with someone whose work I admired from afar, until I met him and told him so in person. But, of course, most of those writers who I admire I would never be lucky enough to meet, and felt that if I did, I would have little to offer apart from praise and appreciation, which might only get one halfway through the first glass of wine before aging into boredom.

Same it was with Andy, who covered a beat few others did. To wit: what is the cultural impact of the internet on the people who make it their playground? He tracked the rise of popular culture as it ricocheted across the bit-broken packet-by-packet surface of the internet; watched it get trapped in eddies and pools of sometimes horrifying digital homes; measured its growth and response as larger media started noticing the gif memes climbing their legs; brought, with delight, explanations of some of the stranger manifestations of the internet echo chamber: the chaffing of jokes that transmogrified from obscure in-jokes into glitchy overly-compressed expressions of pure weirdness.

It was Baio’s curiosity, compassion, and humor that made new posts by him top priorities when the indicator in NetNewsWire showed a new unread Waxy.org post.

So, Andy, along with Andy McMillian, who I didn’t know when they launched XOXO, but had admired his work on the Build Festival and his bookazine series The Manual, started this festival, and I was lucky enough to be one of the 400 people who took a chance on them.

That September, we convened on an old laundry in Portland, next to tall curving windows, and sat close together in folding chairs during two days of talks. Many people have written about the talks, and they are all online for you to see, so I’m not going to focus on those, despite their importance to me, and the festival.

Instead I want to talk about the things around the talks. The Andys (which is what collectively, and affectionately, the community calls Baio and McMillian) have told the story that they invited everyone to come on Thursday, but only scheduled for Saturday and Sunday, and so in a pinch came up with "XOXO Social" for Friday, a day of events where people could hang out and get to know each other. We got free access to Ground Kontrol, invited to drop by the Panic Software offices, and Wieden+Kennedy had a rooftop soiree replete with circus performers.


Sitting next to a stranger was made much less awkward when you had seen them the day before around town, or had played pinball with them, or ran into them browsing at Powells.

Then there was the eating. Portland, of course, has amazing food, and parked outside the festival was Nong’s Khao Man Gai truck (for me, the quintessential taste of XOXO, along with iced cold brew coffee), among other amazements.

We played tabletop games, watched music, hung out at picnic tables on a closed city street, wandered a marketplace on the ground floor of the Yale Union that had 3D printers, games, and designers, and generally had a marvelous time.

Then they did it again. Seven times, now, over eight years. Instead of repeating the formula over and over, the Andys always try new things each year. Some experiments have been as successful as XOXO Social, some were tried once and not repeated. A reader board greeted us at registration a few years back, imploring: "Lower your expectations".

My personal approach is to not expect anything. To go in as raw as I can, and open myself up to whatever I find.

And when I walk away from the festival, my mind is a fog. I’m peopled-out, but also inspired. The talks are blurs of moments, the live podcasts, the in-person chats, the tabletop games, the serendipitous moments witnessed, the kindness and generosity of spirit all around, it conspires into a kind of smoothed liquid brain that precludes me from sensibly writing about the festival (I have, for the seven years, attempted to write about each and every festival, and failed until now, thanks to brain smoothness).

I doubt this website, as it sits, would exist without XOXO. I published my own novel through a Kickstarter, inspired by the festival and its community. XOXO helped me to learn to ask for what I need, and to not be afraid to be myself. It helped me create work and put it into the world. It’s changed my life in many ways, some professional, many intensely personal and deeply meaningful. I see people, each year, that light the world for me, and who I think about all year.

Each festival is end-capped by the Andys on stage. This year, unlike all others, they had MCs — Helen Zaltzman, of The Allusionist, and Hrishikesh Hirway, of Song Exploder — which took some pressure off them, but still they started and ended together. There are always tears at the end, and perhaps relief that they pulled off another year. They always do (with the help of many, of course), in admirable fashion.

What a pleasure it is to feel hope about the internet and its people, if only for a brief time. What I walk away with, each year, is gratitude. I am appreciative of being part of a community that watches out for all members with a strict code of conduct (the Andys remove at least one person for breaking the code, and ban them for life, each year), and clear work on inclusion. I am so grateful to be part of a community that works so hard on helping people who are excluded elsewhere feel welcome.

I’m paraphrasing, but Baio said the first year that he thought the name XOXO would be a great filter towards the kind of haters he wanted to keep out, since none of them would attend a festival called hugs and kisses. He was right, and the extra work, and policing where necessary, has imbued the festival with a rich sense of belonging for many different kinds of people.

My father, who was a minister, always told me — a devout non-believer — that at heart, churches were about people coming together and creating something bigger than themselves. I sometimes wonder what a secular church would be like, one that wasn’t focused around religious teaching, but around morality, perhaps, around self-awareness of the world. About the importance of creating, and placing your creations in the world. Or, like my father — who was a wonderful writer who used his platform for storytelling and exploration, instead of condemnation and evangelism — often preached about questioning ourselves, our place in our communities, our capacity to do good and help people.

That’s really the only way I can describe what I’ve found at XOXO. People I want to see, listen to, learn from. Two days of the kinds of sermons talks my dad would have loved — questing, questioning, inward facing, reflective, humble, personal. Then, community. People coming together. Trying to make build greater than themselves.

Sometimes failing, but always recognizing that you have to show up to even put the effort in. Lower your expectations, yes, but for the love of all that is good, show up. It all can’t start until you make the choice to do just that. Please show up, we’re waiting to see what you make.

I’m so grateful for this community, for the inspiration, for the opportunity to be present, to listen and learn, and for all the tremendous fun and friendship. Thank you @waxpancake @andymcmillan! pic.twitter.com/gvO2ABC6gm