The economic crime that dare not speak its name 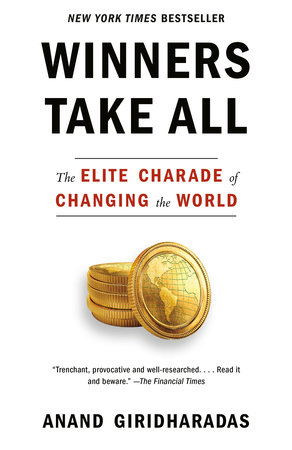 As someone pointed out last night, many of the books we've discussed in the Reading Through It Book Club can be assigned to one of two categories. One the one hand, there are the books that address American problems on a deeply personal level. Here, I'm thinking of books like Sarah Smarsh's Heartland and Amy Goldstein's Janesville. On the other hand, you have the books about systemic abuses that create the American problems. One example of those high-level looks at American injustice is Jane Meyer's Dark Money. And another is the book that we discussed at last night's meeting: Winners Take All: The Elite Charade of Changing the World by Anand Giridharadas.

One of the things that members of the book club most appreciated about Giridharadas's deeply reported look at economic inequality and the ways that wealthy elites disguise and explain away their power is the way that the author doesn't villify every one of his subjects. While Giridharadas does write about some real monsters in this book, he also allows for the fact that billionaires are entirely surrounded in feel-good bubbles, and that many of them genuinely have no idea that the good they do in the world is dwarfed by the harm that their wealth hoarding has done. He attacks "good" left-wingers with the same vitality that many economic writers reserve for only conservative subjects.

Giridharadas is a gifted journalist and a compelling writer who can bring a striking clarity to a complex issue. Phrases from the book effortlessly wound themselves directly into our conversation as a kind of shorthand — "win-win" showed up a lot, and a phrase like "elites" that is often interpreted to mean "people I don't like and want to frame as snooty" had a very direct and clear definition that we all understood.

Put simply, until Giridharadas came along, we simply didn't have the vocabulary to describe the particular kind of grift that America's wealthiest citizens are employing. There's something so insidious about the way that the wealthiest billionaires use charitable giving as a shield against all criticism that most of us haven't been able to identify the scam taking place in plain sight.

It's so rare to find a thinker who identifies something that has previously gone unnamed. The late comedian Harris Wittels really hit on a very specific and common situation when he coined the word "humblebrag," for instance. Giridharadas might not have given us a single word to describe the very particular abuse of power and wealth that he identifies in Winner Take All, but he has perfectly diagnosed the societal sickness behind our most pressing economic issues. But now that the words have been spoken, we can't help but notice this abuse of power wherever it happens.