Once a quarter, lapsed historian and very slow reader Julie Yue dives into the archives to find one vivid historical fiction and one rigorous history book that go together like perfume and ambergris.

Despite being the little weirdo who went straight to the biography aisle at the children’s library, the grown me has not always loved history as entertainment. In fact, too often I abandoned popular volumes of historical fiction, aggravated by the mellifluous descriptions of moonlit cobblestones (we still have cobblestones—they’re not lovely, they turn your feet into pâté) and characters so full of newfangled spunk they could be dropped into a nineties sitcom with little revision. So much historical fiction reads like a tourism pamphlet, making the past feel so available, so conquerable, a world we are free to step into. There and back again.

The work of historians is nothing like that. The past isn’t on view, the archive isn’t a museum you can meander through, with storylines and exhibits carefully laid out. It’s the historian’s job to find the story, to decipher the logic of our predecessors as they excavate catalogues of microfilm, or translate obscure, possibly meaningless, medieval tax records. What’s more, so much of our history has been discarded, censored, and destroyed. And much of it is regulated by social and moral codes we find so distasteful that we suppress it ourselves. It is the work of historians to interpret the meager scraps we’re left with. And their interpretations might surprise you.

Venturing into a different time and place tells us something vital about the diverse human condition. The opportunities for varied and difficult kinds of empathy are endless. The past and the people in it do not exist as a prelude to ourselves. They exist in their own right. They are not necessarily outraged by the same injustices we are, and they are not overjoyed by the same revelations either.

In an effort to think more historically about historical fiction, each of these columns will put one piece of historical fiction and one historiography into conversation, and see what new readings we can uncover. This time, I read French historian Alain Corbin’s seminal work on the history of the senses, The Foul and the Fragrant: Odor and the French Social Imagination (1982) and Patrick Süskind’s Perfume: The Story of a Murderer (1985), a thriller about a murderous perfume-maker set in mid-eighteenth-century France. These two books, published within a few years of each other, offer two views on early modern French society and the way people thought about the way things smelled. 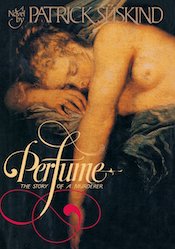 I’m beginning this column by (re)reading Perfume, because I think it’s the perfect example of the best kind of historical fiction. It finds its footing in the specific cultural anxieties of a precise moment in time, and as a result it tells a story that blooms in its setting. The story couldn’t have been told in twelfth-century Belgium or post-war Vietnam. Süskind takes a historian’s lucid attempt at decoding the fears of death and deception of the eighteenth-century French and turns it into your own nightmare.

Perfume doesn’t attempt to simply be an illumination of a time period with characters to fill it. It provides the reader with something more disquieting and rich. Like a historian, Süskind’s book does not simply describe the past, it interprets the past. Like a historian, Süskind takes settings and characters and gives you actors and mechanisms. It forces you to consider a logic you wouldn’t otherwise think twice about. If Corbin produced an intriguing, coherent analysis, Süskind created its thrilling metaphor.

It’s successful because it makes no attempt to configure a world to our sensibilities, in fact it forces you to follow a character who navigates his world using literally the wrong sense organ. While we, literate and freshly showered, walk down the streets watching traffic lights and reading road signs, Süskind’s protagonist follows his nose and can barely string sentences together. And as a result, we get an sensual evocation of a time where the social calculus must have been startlingly foreign but no less complex.

But first, let’s start with the history: 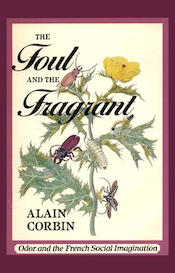 In Corbin’s analysis of pre-modern France, “stenches filled the nose; but they also filled the mind.” A student of the Annales School of History, which broke down the barriers between traditional political history and other disciplines, Alain Corbin plumbed the eighteenth and nineteenth century’s supposedly neutral territories like chemistry and ventilation for hierarchies of order, class, education, and refinement in The Foul and the Fragrant. “Abhorrence to smells,” Corbin writes, “produces its own form of social power.”

In the eighteenth century, odor was deeply connected with identity, life, and death. Every organ had a different smell, every age group, every sex, every difference in diet produced a distinctive atmosphere around the individual. But paradoxically in the era before Louis Pasteur, stench could also kill you. Miasmas were the epicenters of disease, doctors and experts were grievously sensitive to smells. Accounts from the time period insisted that strong, unpleasant odors caused itchy throats, swollen tongues, even foaming mouths and epileptic fits. In the documentary evidence, there was “a collective hypersensitivity to odors of all sorts.”

Olfactory vigilance not only aimed to detect the threat, the risk of infection, but also entailed a permanent monitoring of the dissolution of individuals and the self.

[As early as 1733,] the atmosphere of bodies influenced human relationships at two levels: at the level of personal attraction or revulsion, and at the level of infection.

At the crux of his book, Corbin argues that the perception of the role of smell changed over time. By the nineteenth century with its advancements in germ theory, odor was no longer something to be analyzed for signs of life or disease, two elements that affected all of society. Instead, stench became “traits of the masses,” and social deodorization began. From a world of “everyone smells” to “the poor smell.” The role of perfume also shifted from masking your natural body odor to revealing your inner identity among the now-deodorized bourgeoisie.

If Patrick Süskind only wanted a setting to evoke historical smelliness, he could have blindly drawn any time period out of a hat. Aside from the last eighty years or so, they would have all smelled pretty rank to our modern noses. Paris is still bemoaned for stinking like a latrine.

But Süskind chose to set it in the eighteenth-century, where French anxieties about scent and olfaction were yet not about class or uncomely behavior, but explicitly about personal identity, attraction and revulsion, life and death. And then he made his protagonist a grubby, scentless survivalist and an unrepentant serial killer who used the power of scent as both disguise and domination. Coincidence? I think not. Süskind likely read Corbin.

In Süskind’s world, Jean-Baptiste Grenouille (conveniently, French for frog) is born in one of the stinkiest cities (Paris) in one of the most malodorous eras of human history (the pre-sewer, pre-shower 1738). While he has no scent of his own, Grenouille has an extraordinary nose. And he decides to create his own personal scent through the gruesome killings of lovely, pubescent girls.

Süskind, from the first page, immerses us in this world where everything smelled and no one could escape their own stench:

In the period of which we speak, there reigned in the cities a stench barely conceivable to us modern men and women. The streets stank of manure, the courtyards of urine, the stairwells tank of moldering wood and rat droppings, the kitchens of spoiled cabbage and mutton fat; the unaired parlors stank of stale dust, the bedrooms of greasy sheets, damp featherbeds, and the pungently sweet aromas of chamber pots.

Süskind is clear that this odor was not relegated to the lower class, “The peasant stank as did the priest, the apprentice as did his master’s, the whole of the aristocracy stank, even the king himself stank, stank like an rank lion, and the queen like an old goat, summer and winter.” But in a world where everyone smelled and emitted what Corbin called the “atmosphere of bodies,” Grenouille has one problem: he smelled like nothing. And thus, he repelled people. When passing people on the street, they literally couldn’t see him coming, so attached were they to an unconscious reliance on smell.

Midway through the book, Grenouille realizes his life would be easier if he manufactured a scent that made him stink like other people. Using vinegar, civet, old sardines, rotting cheese and cat piss, he distills himself an imitation human perfume. Then he went out into the street, where for the first time in his life, he was accepted into society.

From his youth on, he had been accustomed to people’s passing him and taking no notice of him whatever, not out of contempt—as he had once believed—but because they were quite unaware of his existence. There was no space surrounding him, no waves broke from him into the atmosphere, as with other people; he had no shadow, so to speak, to cast across another’s face.

With this revelation and his powerful nose, Grenouille begins collecting human scents, with the aim of blending the perfect vial so that every person who saw him would find him irresistible.

After evoking a strange new world of social smells, Perfume, in its denouement, goes terrifyingly off the rails. You realize fearfully that the story wasn’t about odor at all. It was about the gullibility and arrogance of society, how easily our most deep-seated institutions can prove impotent, how quickly we revert to our animal instincts if only given the chance.

Upon its completely logical yet utterly monstrous conclusion, you close the book with your native anxieties on edge, your sense of propriety shuddering. It was a feeling that Corbin only managed to record from doctors and philosophers who held their breath for fear of infestation and death, but now you feel it too, like a slimy frog in your stomach.