Lunch Date: Taking Gideon the Ninth to the basement, which is unexpectedly appropriate

(Once in a while, we take a new(ish) book out to lunch and give it half an hour or so to grab our attention. **Lunch Date** is our comment on that speed-dating experience. 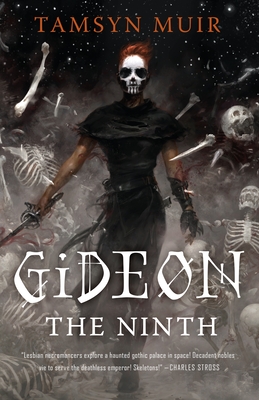 Who's your date today?

Gideon the Ninth, by Tamsyn Muir. Gideon is an indentured broadsword fighter forced to the rapier, and to courtly clothes, to serve as cavalier to her much-loathed mistress — Harrowhark Nonagesimus, heir to the house of Drearburgh. Sarcasm, sorcery, and swordplay follow. Charles Stross describes it as "Lesbian necromancers explore a haunted gothic palace in space." I mean to say!

As usual, unfortunately, my ambition to leave the house was larger than my stomach, or, rather, larger than the energy I had left at the end of a long day. So: I went to the basement, where I can read with one hand and flip a cat toy in the other. It's the good life.

I had a glass of sparkling rosé and half a dark-chocolate-almond-coconut Kind bar.

How was the food?

Pretty good! Dark-chocolate-coconut is definitely the best sort of Kind bar; it has the category-defying texture of Mounds, with slightly less sweetness and plausible deniability on health value. Louis de Grenelle Saumur Brut is the only sparkling rosé among the standards available at your local grocery store. Crispy little bubbles, entirely lacks the Jolly Rancher flavor that dogs rosés described as "drinkable" ... it's the best thing that can happen to Sunday evening (and Monday night — restraint!).

What does your date say about itself?

From the publisher's promotional copy:

Tamsyn Muir's Gideon the Ninth unveils a solar system of swordplay, cut-throat politics, and lesbian necromancers. Her characters leap off the page, as skillfully animated as necromantic skeletons. The result is a heart-pounding epic science fantasy.

Brought up by unfriendly, ossifying nuns, ancient retainers, and countless skeletons, Gideon is ready to abandon a life of servitude and an afterlife as a reanimated corpse. She packs up her sword, her shoes, and her dirty magazines, and prepares to launch her daring escape. But her childhood nemesis won't set her free without a service.

Harrowhark Nonagesimus, Reverend Daughter of the Ninth House and bone witch extraordinaire, has been summoned into action. The Emperor has invited the heirs to each of his loyal Houses to a deadly trial of wits and skill. If Harrowhark succeeds she will become an immortal, all-powerful servant of the Resurrection, but no necromancer can ascend without their cavalier. Without Gideon's sword, Harrow will fail, and the Ninth House will die.

Of course, some things are better left dead.

Is there a representative quote?

On every single, magical page. Here's just one.

Their mummified faces did not yield to time because — as Gideon knew, and the marshal, and the captain of the guard, and nobody else in the universe — Harrowhark had frozen them forever. Ever the obsessive and secretive scholar, she had derived at great cost some forgotten way of preserving and puppeting the bodies. She had found a nasty, forbidden little book in the great Ninth repositories of nasty, forbidden little books, and all the Houses would have had a collective aneurysm if they knew she'd even read it. She hadn't executed it very well — her parents were fine from the shoulders up, but from the shoulders down they were bad — though she had, admittedly, been ten.

Will you two end up in bed together?

Oh my gosh yes. I can't believe I'm writing this right now instead of curling up — in bed? Anywhere! The basement floor will do! — and blazing through this beauty.

There's lots of pop culture triangulation going on in descriptions of this book; "Daria in space," for example, or random name-drops of The Hunger Games. Nothing wrong with that, but what this reminds me of most is much less pop-y things: Mervyn Peake's Gormenghast and Fritz Leiber's Fafhrd and the Grey Mouser. Muir has got Peake's jewel-encrusted sentences (with just a touch of Jack Vance). And, as when you're reading Leiber, you want to test each jewel against a piece of glass to see which scratches first.

Reading this in the same set of days as Kim and Kim, I can't help feeling nostalgia for a world that wasn't — one in which a certain girl (and lots of others of all persuasions) grew up with stories like these to align with, instead of emerging from an adolescence dominated by Heinlein and other dominant males into years of recovery.

AND it's the first in a series. I haven't felt this grateful to be thousands of pages from "true last chapter" since I discovered Laurie J Marks. Double full speed ahead!