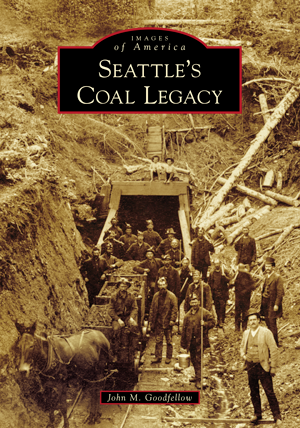 This Sunday at 6 pm, Seattle author John Goodfellow will give a presentation to celebrate his new book Seattle's Coal Legacy, an intensely researched history of the forgotten history of coal mining in the Seattle area, at Third Place Books Lake Forest Park. I talked with Goodfellow on the phone last week about the book, which is illustrated on nearly every page with photographs from the era of the bustling coal industry. What follows is an abridged and lightly edited version of our conversation.

I really enjoyed your book — thanks for writing it. I've lived here for twenty years and I didn't know that the area was a coal mining hub until I happened across the town of Newcastle on a walk and found a plaque explaining the town's history. I was completely unaware that there was any coal mining in the Seattle area. You grew up here; how did you learn that Seattle used to mine and ship coal?

I did an underwater survey project of Lake Union. We were just basically looking at all the ships and boats that have been pushed off from the different shipyards that were there, because they were out of use. They just kind of sunk them out there in the old days.

I realized there was a coal terminal at the bottom of Westlake — what was that all about? I started doing some research and learned that the coal was coming from Newcastle. I've always been very interested in industrial history, especially in the Seattle area and, I knew there was coal because I knew of Black Diamond, which was certainly one of the major mines, and they're the ones who keep the coal history alive. They're very much into their coal history.

Was there ever a risk of Seattle becoming like a West Virginia, in terms of massive coal production?

It was like West Virginia, in some ways, until the demise of coal, which was after the first World War. There were no other coal mines on the West coast. They didn't have coal, so they had to either get it from Seattle or they had to get it imported from from South America.

I guess I was thinking about the strip mining operations in West Virginia, which leaves the landscape completely ravaged.

If you drive that road directly to the east of Black Diamond, there's a big strip mine there up on top of the ridge.

Oh, really? I didn't know that.

Yeah, it looks just like a quarry. It's full of water, and I wouldn't doubt it would make a nice swimming hole, but that was a strip mine and it totally did destroy that mountain.

In general, in Seattle the coal here was not near the surface — it was a seam, and it was going pretty deep. But there were parts where coal was near the surface and that's where they did strip mining. Centralia had a big strip mine next to the power plants down there.

How did you come to get interested in Seattle-area industrial history? It sounds like you've got a whole bunch of books rolling around in your head about the topic.

As kids, we would go on road trips with my parents. And there were — there probably still are — a lot of steam tractors out there. I just became totally fascinated. When I was a little older, the whole energy crisis happened, so there was a focus on questions like "what is energy? How's it used?" That made me very interested in coal. Obviously, at that point, it's only used now for generating electricity, but from a historical perspective, it was very important.

Reading your book, I had to think a lot about how we pride ourselves on our history of environmentalism in Washington state, and we forget about all this stuff from our not-so-distant past. I can't believe I didn't know about this.

Nobody knows about it. I didn't know about it either until I started to really look at it and focus in on it. So it's a surprise.

Why do you think the city has so much amnesia about our coal-producing past?

Coal is dirty, and people in Seattle thought of themselves as part of the new century with the World's Fair and everything, and they were leaving the coal behind. They just stopped talking about it.

But those bike trails like the Burke Gilman trail and the trail along West Sammamish were going to the coal mines in Issaquah. Gasworks Park was coal. So we've taken a lot of this infrastructure of coal and we actually turned it into recreation.

We're surrounded by a lot of coal stacks from businesses that ran coal. I just found one last week — I was going to get underwear at Fred Meyer down in Ballard, and to the south of Fred Meyer, there's a power plant with a coal stack on it for running a factory. It's not being used obviously, but when you see these really big metal stacks, — there's also one on top of Paramount Theater — those are coal sacks. These are used for generating power and heat and everything else.

And they're still around. The UW coal stacks don't burn coal anymore — at least I don't think they do. Also in South Lake Union, there's coal stacks. There are coal stacks down in Georgetown. You start looking around and you start seeing them everywhere. So the history is all there. It's just been sort of repurposed and become part of the Seattle skyline.