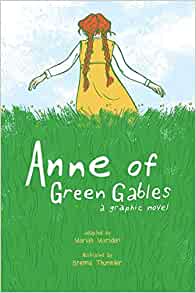 The graphic novel adaptation of Anne of Green Gables is by no means new — it was published in October of 2017 — but it's certainly new to me. I happened across it while browsing at Lion Heart Book Store in Pike Place Market, and it was an immediate sale.

The optimistic, obstinate Anne Shirley is one of the greatest characters in literary history, and she's proven resilient enough to survive even the clumsiest of adaptations — including Anne with an E, the gritty TV series adaptation of the book that made its American premiere on Netflix a few years ago. Even the unnecessary darkness of Anne with an E couldn't overpower the exuberance and hope of Amybeth McNulty's performance as Anne. It's as though Anne's indomitable spirit refuses to be warped by anyone — even adapters who misunderstand the point of her story.

I'm happy to report that writer Mariah Marsden and illustrator Brenna Thummler have done Anne Shirley proud with their Anne of Green Gables comic. Their Anne is every bit as tempestuous and adventurous and fiery and mercurial and free as the Anne in L.M. Montgomery's original novel. When she sulks, her body warps into itself like a question mark. When she rages at an injustice, she lashes out in a full-page spread with her pointy elbows flying at wide angles. When she exults in nature ("I'm so glad I live in a world where there are Octobers!") her joy is contagious.

Thummler's artwork goes a long way toward helping the reader feel Anne's sense of wonder. This is a beautiful book; as the seasons pass by the Cuthbert's farm, the pages are enveloped in lush greens, glowing whites, and flaming oranges. Our perspective is always shifting toward and away from the characters: we see Anne's expression in tight closeup on one page, then the next reveals a double-page spread of rolling hills and majestic forests, with two small figures off center, dwarfed by nature. The comic at once embraces Anne's perspective and also turns that perspective outward, to soak in the splendor of the world outside.

Some adaptations of Anne of Green Gables — looking at you, Anne with an E — focus too much on the relationship between orphaned Anne and the aloof Cuthberts, treating the story as though it's a friction-filled will-they-or-won't-they drama. Those interpretations of the story hinge on the ridiculous idea that the adoptive parents might shun their charge, returning her to the orphanage when she behaves badly.

Marsden's adaptation, though, understands that Anne of Green Gables is a story of love at first sight: the instant the Cuthberts realize that a mixup has delivered Anne to their door, they unconditionally welcome her into their hearts forever. Instead, Anne of Green Gables is the story of a family gradually learning how to express their deep and abiding love to each other. And as they improve their ability to communicate with each other, Anne learns how better to express her boundless love for the world.

By skillfully adapting this familiar story to yet another medium, Thummler and Marsden are expanding the family's love language to encompass even more of the world. More than 110 years since Montgomery first wrote her to life, Anne keeps growing and learning and loving.