If the coronavirus pandemic had not happened, tens of thousands of people would have been cramming into Washington State Convention Center for Emerald City Comic Con today. Cancelling the event was the right thing to do; it's our duty to avoid large groups to protect the elderly and other vulnerable populations. But ECCC is a huge financial component of many peoples' lives — artists, comics shops, publishers, writers — and the loss of that income could be catastrophic for them.

This weekend, a few enterprising folks are doing their best to bring the ECCC experience to you, giving a chance to directly support the artists who've been hit hardest by this cancellation.

The Very Very Shopping Network debuts at 2 pm on Twitch this afternoon. It's an ECCC-flavored riff on the QVC Shopping network, allowing people to buy comics and merchandise from the comfort of their own couches, hosted by Seattle cartoonist Jen Vaughn and Jazzlyn Stone (who also designed the graphics) and produced with Aaron Oak, Julie Wagness and the staff of Very Very Spaceship.

For three straight days, the VVSN will present eight hours of programming with authors and cartoonists who were slated to appear at ECCC, including Cat Rambo, Kate Leth, and Kel MacDonald, and comics publishers who had planned to present new books at the show, including Dark Horse Comics, Oni Press, and TKO Presents. There will be flash sales, giveaways, and other unique opportunities to connect with comics creators. Here's a calendar of VVSN events: 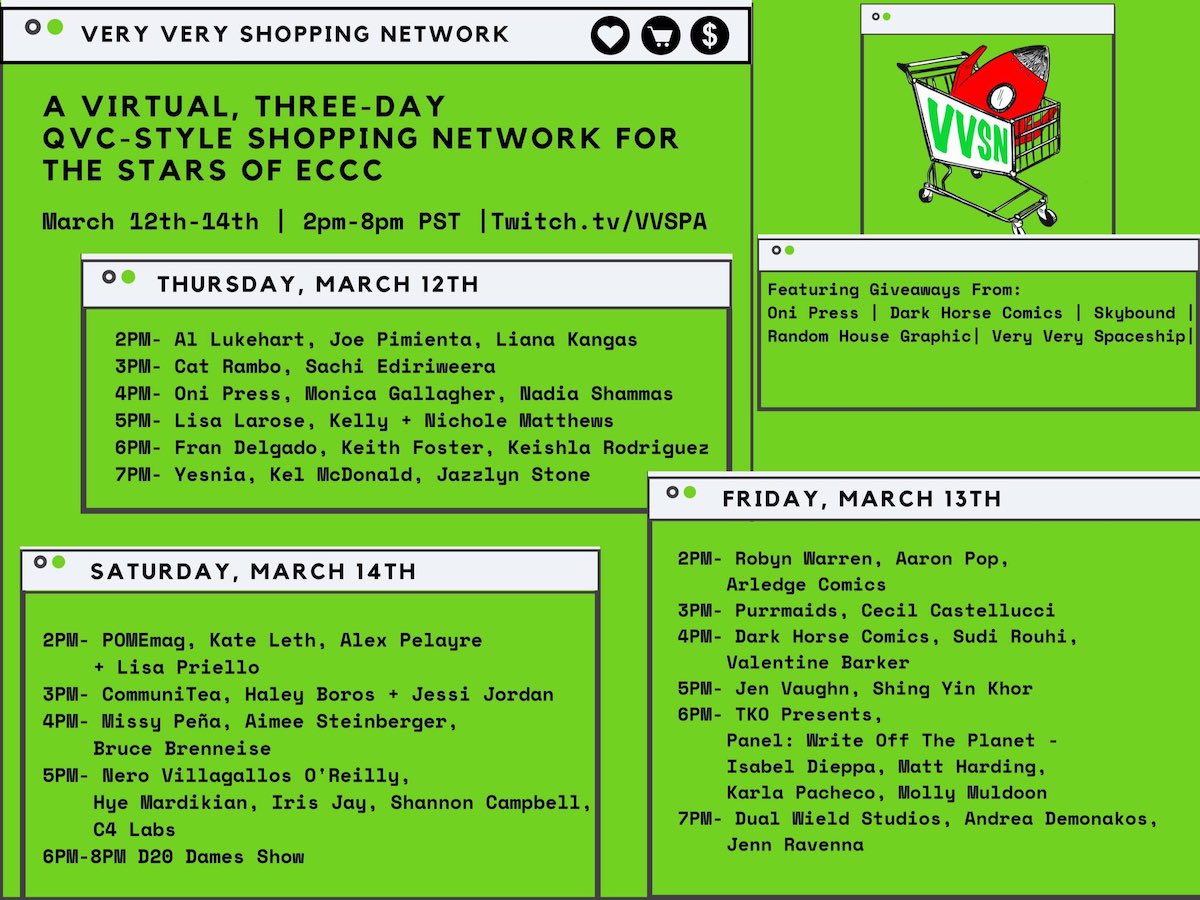 At roughly the same time, indie comics publisher Iron Circus will be presenting Pajamacon on their own Twitch Channel, with guests including Steve Lieber and Chris Robeson.

Other ECCC-related sales happening online that you should know about:

Obviously, nothing can replace the meatspace-y thrill of making a real human connection with a beloved creator. But these virtual comic conventions do provide the other big benefit of physical comic conventions: the opportunity to discover exciting new creators and publishers. If you were to just devote half of the money you were going to put toward ECCC into the artists who are taking part in the virtual convention going on this weekend, you'd be changing lives for the better.