Criminal Fiction: Crime in the time of corona 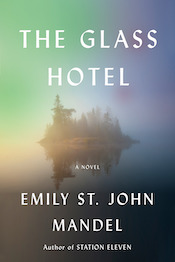 A horribly damaging Madoff-style Ponzi scheme gyrates at the heart of The Glass Hotel by Emily St. John Mandel (Knopf). Mandel’s follow-up to her terrific Station Eleven circles around the lives of two siblings navigating the world of haves and have-nots: Vincent is a woman who manages to reach a pinnacle spot in the monied world; Paul struggles to find any kind of perch for himself, finally doing so by dubious means. But nothing stays in place in this immersive read, and the various characters who interact with Paul and Vincent, impacting inexorably on their individual destinies, are so vividly drawn that the novel has the feel of a character-collective approach rather than being solely protagonist-driven. From a super-savvy investor to the nefarious investment manager and the employees who enabled his financial swindling, and on to Vincent’s so-called best friend during her wealth-infused days, it’s the interconnections and interactions between Mandel’s characters that give this novel its pliability and its spirit, while myriad moody settings – including a desolate containership and a forest-hidden, super-luxe hotel – contribute to its densely-layered atmosphere. 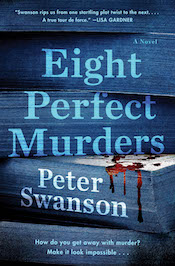 Peter Swanson does deceptively dark mysteries really well – especially when they contain gleeful elements of cosiness in their structure. In Eight Perfect Murders (William Morrow), one Malcolm Kershaw, a bookseller and crime-fiction fan, finds himself neck-deep in his own mystery: someone appears to be using a list of, well, eight perfect murders that Malcolm penned in an off-the-cuff moment on his bookstore’s blog years earlier. The round-up included grisly and twisty classics such as Malice Aforethought, The ABC Murders, Deathtrap, Strangers on a Train, and The Secret History, and someone appears to be taking great pleasure in replicating or referencing those fictional killings in real life. Propulsive, perplexing and highly satisfying through to the final nail in the coffin – so to speak – Eight Perfect Murders offers a tantalizing piece of pretty much near-perfection in page-turning book form. 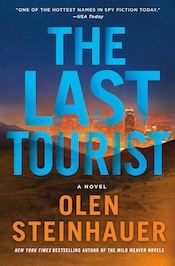 In Olen Steinhauer’s The Last Tourist (Minotaur), on a 30-hour ferry across from the Canary Islands to Spain, CIA analyst Abdul Ghali listens to an outrageous, conspiracy-level tale, huge chunks of which encapsulate “a story from the dark side of capitalism.” Abdul’s been sent to find out what Milo Weaver, former CIA agent extraordinaire, knows about a shadowy organization known as Massive Brigade as well as its connections to other internationally-flung mercenaries. Deftly sandwiching one timeline within another, Steinhauer paints a chilling picture drawn straight from contemporary headlines: over the days that I read the book, I sometimes had trouble separating circumstances in The Last Tourist from the real-life news, primarily because they actually appeared to be converging in an alarming fashion. A brainy, brilliant, multiple-thrills-a-minute chase across the globe – and across some of our most hallowed infrastructures – will have you eyeing tomorrow’s news with a different, discerning mindset. 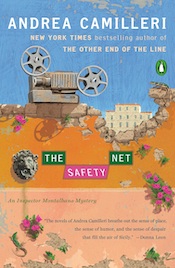 Two nifty little mysteries lie at the center of Andrea Camilleri’s The Safety Net (Penguin), nimbly translated by Stephen Sartarelli. During a manic period in the life of Vigàta, all the townsfolk are madly hunting through their Super-8 films from the 1950s in order to provide potential footage and imagery to a visiting film crew from Sweden. One man, Ernesto Sabatello, discovers an oddity in his attic: every year on a specific day, at a specific time, his father filmed the same patch of wall. As Inspector Montalbano ponders these celluloid artifacts, he also gets involved in a school shooting: no one is hurt, but the motivations of the armed invaders prove elusive. In the latest instalment in his entertaining Montalbano series, Camilleri, who died last year, applies his old-school detecting to the modern mysteries of social media and the ways of young teenagers, while rhapsodizing philosophically on the various forms of protection that people provide for themselves or demand of others. 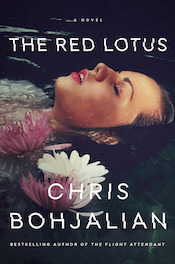 In the opening pages of The Red Lotus (Doubleday) a nurse, Alexis, and a hospital administrator, Austin, meet kind-of-cute during one chaotic Saturday night in the ER. Well, apart from the bullet in Austin’s arm that is – and apart from the fact that in a Bohjalian book, the course of most things, including true love, rarely run particularly smoothly. Six months down the road, Alexis and Austin, still in their honeymoon phase, are on a biking trip in Vietnam when Austin goes missing. Alexis, a formidable woman who readily applies her ER nursing skills to deciphering the sudden mystery, quickly becomes the most compelling voice in this story: with each of her discoveries, the central puzzle both deepens and expands. As always, Bohjalian creates a mesmerizing tale, a timely socio-political-business story with human frailties, illusions, dis-illusions, and strengths firmly at its center.

Nope. Forgive me. I have too many writers who are friends. But I will tell you that among my top five dead writers might be:

I write in utter silence. But five songs that can inspire me are: