Eating in quarantine with Samin Nosrat

(Once in a while, we take a new(ish) book out to lunch and give it half an hour or so to grab our attention. Lunch Date is our comment on that speed-dating experience.

Who's your date today? 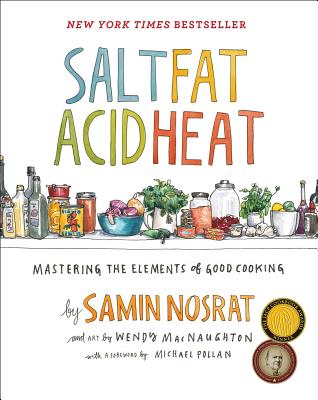 Salt Fat Acid Heat: Mastering the Elements of Good Cooking, by Samin Nosrat. One-time chef at Chez Panisse, food writer and food champion, Nosrat approaches cooking (and eating) with an enjoyment and humor reminiscent of the impossibly joyful Julia Child. Nosrat is beloved for her essays, cookbook, and television show, and the "pandemic cooking" podcast she co-hosts with Hrishikesh Hirway is firm ground in a hurricane of crazy.

Salt Fat Acid Heat is a book about cooking and a cookbook both. The first 200 pages (just about) are a master course in simple cookery based on the four elements in the title, dotted with brilliantly useful watercolored sketches — for example, a swash of green that helps visualize the acidity of a long list of ingredients. The second half is a selection of recipes that are good both for dinner and for practical experimentation

To the kitchen! Because, well, that's almost the only option right now. (Though you should get takeout from your favorite local restaurant, and we often do — thank you, Seattle restaurants for continuing to feed us all).

I am a reluctant and ham-handed cook, terrified of the words "to taste" and allergic to recipes with more than six ingredients. My favorite recipes include only one ingredient, which is "frozen pizza." However, like many people right now, I've been backed into the stove by the "shelter in place" order, and I'm enjoying that specific flavor of guilt that comes from being miserable at one's good fortune in having food to eat and a home to eat it in.

I made Nosrat's receipt for pasta with broccoli and breadcrumbs, because I loathe broccoli and it was a natural way to exorcise (or exercise) self-loathing. Nine ingredients total; subtract difficulty points for olive oil, red pepper flakes, and salt, but add points for "sprinkling crumbs," which are an entirely separate recipe hidden within the recipe. Cheaters never prosper, Nosrat.

How was the food?

Surprisingly, edible. Surprisingly edible! The flavor of the broccoli is softened by the longish cooking time, and the texture — all those unbearable little pebbles of broccoli! — is smoothed out as well. And, in truth, once you coat anything with enough parmesan and breadcrumbs, it's basically pizza, isn't it?

What does your date say about itself? From the publisher's promotional copy:

In the tradition of The Joy of Cooking and How to Cook Everything comes Salt, Fat, Acid, Heat, an ambitious new approach to cooking by a major new culinary voice. Chef and writer Samin Nosrat has taught everyone from professional chefs to middle school kids to author Michael Pollan to cook using her revolutionary, yet simple, philosophy. Master the use of just four elements—Salt, which enhances flavor; Fat, which delivers flavor and generates texture; Acid, which balances flavor; and Heat, which ultimately determines the texture of food—and anything you cook will be delicious. By explaining the hows and whys of good cooking, Salt, Fat, Acid, Heat will teach and inspire a new generation of cooks how to confidently make better decisions in the kitchen and cook delicious meals with any ingredients, anywhere, at any time.

Is there a representative quote?

Here's one that very much represents Nosrat's approach to food, which is hands-on and unpretentious in the extreme:

Get rid of the shaker, dump the salt in the bowl, and start using your fingers to season your food. You should be able to fit all five fingers into your salt bowl and easily grab a palmful of salt. This important — but often unsaid — rule of good cooking is so routine for professional cooks that when working in an unfamiliar kitchen, we instinctively hunt for containers to use as salt bowls. When pressed, I've ever used coconut shells.

Will you two end up in bed together?

We will definitely have lunch together again, and dinner, many times. It's hard to pinpoint why Nosrat's approach is so ... approachable. It helps that she's a presence, with an unabashed laugh that's accessible across media. It helps that what she's teaching is how to taste, as much as how to cook, and how to taste is one of the scariest bits of cooking for all religious recipe-followers.

And this really is a moment for a book like this and a cook like Samin Nosrat. Food is surrounded by fear right now; fear of shortage, fear of contagion, fear that the world will never change back. Nosrat tells us that even if everything isn't okay, we can change in ways that aren't fearful. Something we need to hear.