We're now on our fourth week without new comics being distributed to comics shops around the world. That doesn't mean that new comics aren't being made — it seems like we'll be seeing some announcements from major creators about independent quarantine-produced comics sometime soon — but it does mean that New Comic Wednesday is no longer really a thing, for now. 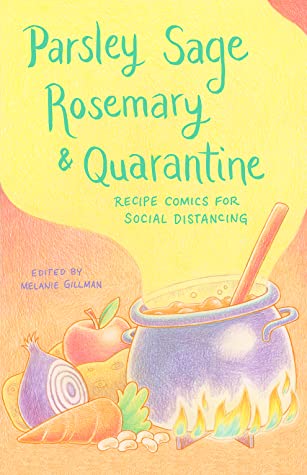 But the digital distribution of comics is still happening. And there's a brand-new comic that 21 creators are selling to keep their heads above water. Parsley Sage Rosemary & Quarantine: Recipe Comics for Social Distancing is a cookbook collecting 21 cartoonists' favorite recipes in comic form. Full-color PDF copies are for sale on Gumroad right now on a name-your-price basis.

Edited by Melanie Gillman, Parsley features contributions from cartoonists including Priya Huq, Shing Yin Khor, Shan Murphy, Sarah W. Searle, and Steenz. The recipes range from fried chicken to dal to frijoles negros, and the cartooning style ranges from primitive to highly stylized. It's a great way to sample a wide array of young comics professionals and figure out how to navigate new paths through the tired food in your pantry. My favorites include the recipe for rice buns, illustrated in a swoopy, classic magazine illustration style by Megan Rose Gedris and Mel Gillman's "extremely customizable" recipe for beer bread, which is crisply illustrated enough to serve as a full-back tattoo. 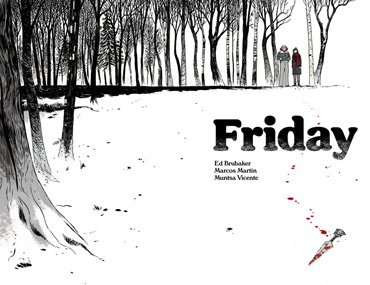 Another new book from high-profile creators had a surprise release yesterday, though it's been in the works since before COVID-19 was even a thing. Panel Syndicate, the pay-as-you-go creator-owned comics hub, released Friday, the first issue of a supernatural mystery comic written by Ed Brubaker, illustrated by Marcos Martin, and colored by Muntsa Vicente.

Martin is one of the most kinetic artists in the field, and he's known for his elegant, simple renderings. With Friday, he's adding some complexity, and it is gorgeous — Edward Gorey is listed as an influence, and that seems head-smackingly obvious when you stare at the spooky forests and melancholy towns in the background of the book.

Brubaker has unfortunately labeled Friday as a "post-YA' comic. I'm not entirely clear what that means — Brubaker cites a number of books for kids and teens as inspiration for the book, and while *Friday certainly falls on the darker side of the spectrum, I don't see anything that I wouldn't hand over to a literate and goth-friendly mature teen reader. If anything, the "post-YA" title, which Brubaker admits in a note in the end of the book, is "just A" when taken literally, feels like Brubaker is just slightly embarrassed about working with children's entertainment.

But whatever you label it, Friday is an interesting first issue with interesting lead characters, it's as gorgeously drawn as the best of Martin's work, and it seems to be heading in some weird directions. Even if today were a normal New Comic Book Day with the usual available options, Friday would most definitely be a standout title — and likely the best book of the week.