Thursday Comics Hangover: The heart of the city 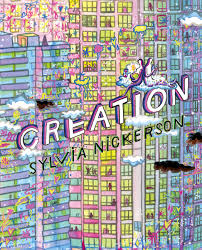 It's impossible at this juncture to tell what lessons we'll draw from coronavirus. One response that has literally kept me up worrying at night, though, is that the pandemic will inspire a new wave of American anti-urbanism. Will people be queasy about riding public transit two years from now? Will people learn to fall in love with the wide-open spaces of sprawl again? I hope not, but it seems at the very least like a real possibility.

It's a good time, then, to read interesting work about cities. And Sylvia Nickerson's new comic Creation is a warts-and-all appreciation of city life. It's about a character — seemingly Nickerson — who moves to a rapidly gentrifying neighborhood in Hamilton, a rust belt city in Ontario with a population roughly the size of Boston. As Toronto and Vancouver get bigger and wealthier, young artists like Nickerson are searching out affordability in mid-range cities like Hamilton. Their arrival signals a kind of doom for the poorer, less privileged residents of Hamilton.

Nickerson shows her new work as part of a neighborhood art walk. She walks around the city with her son. She sketches the city in all its grandeur and grit. Her son becomes obsessed with garbage, and soon they're observing the people who live in the gutters. She can't protect her child from crime and pollution and poverty, even as she works hard to build him a better life.

In Creation, Nickerson largely draws human beings as empty outlines, like Keith Haring figures. They're expressive — you can see one human regarding another human with caution, and you immediately know which economic class each person is from, what their stations in life are — but they lack finer details. Nickerson gives all that detail over to the city itself. The windows and walls and detritus of Hamilton are lovingly sketched on every single page here — in a style that is not quite realistic but which feels photographic in some way.

In one two-page spread, Nickerson draws an urbanist's fantasy, with exposed brick and Victorian facades. On the next, she draws the cigarette butts and used condoms that she sees on the ground. She's not making a judgment about the city; she's seeing it as it is, and reporting back to us. You can't talk about the soul of Hamilton, she argues, without discussing the class disparities and the gentrification and the heartbreak and the crime.

Any honest assessment of a city has to include all those qualities, and then each person to do the calculus to determine the value, and if it's worth the cost. For myself, and I think for Nickerson, the cost is worth it. For city-dwellers, a city is a commitment you make every day with the land and with your neighbors, and every commitment carries with it a little bit of hope, a promise of tomorrow.